“Where there is will there is way” though it is an old proverb but it has enough power and truth. If you have strong will power you can do what you want. So in Bhagabat Gita it was nicely quoted that “Pangu langheyate Giri”. It means with one’s strong will power a physically challenged person can climb up a hill. We can also take the example of Mahatma Gandhi the Father of Nation, Ashok Maurya the Chakrabrati Samrat, Reziya Sultan of Mughal Dynasty & a lot who were due to their strong will power had changed the fate of the time & victory over their weaknesses. It was the story of the history but at present we have a lot of heroes those who are creating example for the society. Mr. Basudev Jakesika aged about 35 is one of such heroes with strong will power & with this he able to influence a dozen of farmer in his & surrounding villages.

Basudev Jakesika a medium farmer lives with his old parents, wife and two sons at the village Khuntabadi which is 10 km away from Muniguda Block Head Quarter. His family owns 4.5 acres of land out of which paddy land measures 1.5 acres which provides 9 month staple food for his 6 member’s family. His measure land (3 acres) is the upland yielding very less & uncertain production. It is needless to explain the situation of his family with such a monsoon dependent agriculture having no other credible source of income. In the upland his family usually grows millets & pulses in 1 acre of land and out of that they earned a maximum return of Rs-5000/- and other land was kept barren in all seasons. It was always pinching Basudev how to make the barren land into productive land.

In the mean time 2014 Harsha Trust gets involved in his village and started work in livelihoods sector. The Professional of Harsha Trust influenced the villagers by propagating strategy, process & new technologies for income enhancement through Farm & off farm initiatives. During that time out of 35 household only 8 families get interested to work with Harsha Trust & Basudev Jakesika was a silent man at that time because of his land was not suitable for vegetable cultivation. It needs some mechanical intervention to convert the land suitable for vegetable. Knowing this need of the Basudeb, the Professional arranges the meeting with the Sarpanch of Patraguda who eventually assured him to extent the support from MGNREGS. After getting assurance from Sarpanch, Basudeb consolidated the confidence within him & started land development work in 2014 summer season (May- June) with his parents, wife & also engaged 20 no’s bullock cart of his own which take 25 days to complete the development work of 1.5 acres of land. Again he was facilitated to apply for installation of bore well under OLIC scheme and during Sep.’15 the bore well became functional. 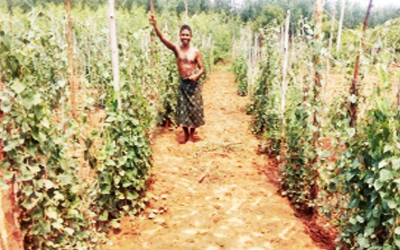 Now the land was ready for use and during the month of October, 2015, he started the vegetable cultivation like cauliflower-10 cent, cabbage-10 cent, tomato-10 cent, brinjal-10 for the first time with the help of Harsha Trust. From the crop he earned Rs32000/ within 4 months, which encouraged him to a great extent which resulted in expansion of the cultivable area from 40 cent to 80 cent of land. During Feb.’16 Harsha Trust shared a new innovative model like 50 cent model, which has a potential of yielding an income of Rs-75000/- in a year. The model consists of 10 cent banana, 10 cent creeper in Permanent Trellis, 10 cent creeper in Seasonal trellis and 20 cent seasonal vegetable. The key requirement is assured Water source with lifting device, Fencing, Basudeb is having all resources except fencing. So he asked for the support of fencing from Harsha Trust and organization supported with barbed wire for fencing in loan basis. Within 10 days he completed the fencing work and started vegetable cultivation like banana in 20 cent, brinjal in 10 cent with drip, pointed gourd in 10 cent, okra in 10 cent, Cow pea in 5 cent, bitter gourd in 5 cent and Greens in the Pointed gourd field as intercrop. By selling these he earned Rs-41100/- by last month i.e. 31st May’16. & earned 80000/- plus during the 2016-17 FY.

Pointed Gourd and Banana standing in the field now & he expect another 30000/- during the season. Now in the kharif season of 2016-17 he grows brinjal in 10 cent, tomato 20 cent in drip, ridge gourd 7 cent, 5 cent cow pea in the field. Though he is not producing vegetable, he estimates to earn Rs-100000/- during the financial Year. By seeing his success 11 farmers adopted the same model during the year. And farmer of nearby village Karadabandha, Litiguda, Bainibasa are now coming to see his field. After implementing the new Model he experienced that the Model required Low input and resulted high income. By selling the crop he repaid Rs-3000/- as loan to Harsha Trust of fencing and Rs-5000/- repaid Paddy loan. Now he planned to purchase one Bike for marketing the vegetable and get marry his son. He is also dreaming of keeping one Smart Phone, to extend his house. After getting the success he told that “everything is possible in the world if one has strong will power”. “When I started my land development works I had no money but I completed the work due to my patience, my family support, Harsha Trust motivation & my will power.”

« Back
Copyright © http://www.harshatrust.org 2018, All rights reserved
Powered By SPIS