Journey of Wendi Hikka from a landless to the Owner of her own Orchard….

Wendi Hikka , belongs to Dakulguda village of Rayagada district. Five years back she had obtained 1.5 acres of land from Government on Forest Right Act (FRA).The land is located at the base of a hill called Hiradangar in the village Dakulguda . The land was sloppy and full of stones and gravels all around the plot. The piece of land was fallow for a long time. Having got the plot Wendi and her husband Lada Hikaka started cultivating Ragi or Kosla for soil rejuvenation and happily got round the year crop. Wendi always strived to get more from the plot as she had to feed 5 memebrs. She always wanted to earn her livelihood from that patch of land by her own labour contribution. wandi says ” my family had to work round the year in others land to earn our livelihood but getting wage for 100 days even is difficult. when asked why Wndi says ” my daughter and her son is also a part of my family. The man whom I married off my daughter had eloped with another woman. Till the time I am alive I will take care of them.”

Wandi being a proactive farmer and hard working always takes part in the initiatives of Harsha Trust in that area. In the mean while Harsha Trust got supported under WADI project from NABARD. This project rekindled a hope in wandi’s life. Working as a wage labourer in other’s land Wendi used to plan her own patch of land but was lacking guidance and support. 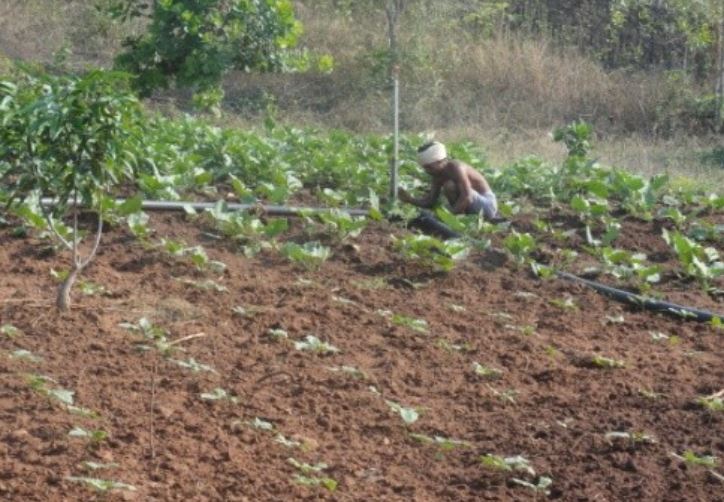 She had started cashew nut plantation under project WADI. It took 4 years for the cashew to bear fruits. In order to get some immediate return wandi planned for some inter cropping of vegetable crops. The crops she adopted as inter cropping were vegetable (brinjal & tomato) and cereals (ragi & maize). The inter cropping provided round the year food for 5 members in the family. Hence they all started contributing labour . They also fence that piece of land in order to protect the land from free gazing of cattle. They constructed a strong stone wall-boundary of about 90 meters length to safe guard their orchard and the inter cropping. Along with round the year food she also had earned Rs 5000/- from Brinjal & Tomato ; Rs 1200/- from maize and Rs 2250 from ragi.

To facilitate the irrigation infrastructure Harsha Trust dug a bore well in their field for irrigation of the standing crops. The bore well has truly increased the yield and wandi has started earning and incresed income of Rs 15,000 to Rs 20,000 each year beyond consumption.

With the increased income Wendi decided to reconstruct their house and changed the roof from Jhikara to asbestos sheet. Lada also purchased a bicycle , a mobile phone and a table fan. It’s not only the asset base of the family that has increased; it also increased the social status in the village. By seeing the hard work Sabitri (the widowed daughter of wandi ) got an appointment as a Anganwadi worker in their village and is getting Rs 1000 /- / month as remuneration.

The family had struggled hard in the past but the allocation of land followed by a structured plan of development of the land has supported the families livelihood needs. It’s wandi’s courage , Hard work & lada’s support which helped the family to emerge as a winner in the difficult times.

Constructed a stone wall all around the plot 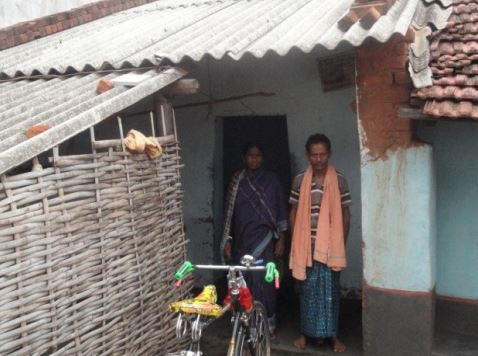 Lada & Wendi in their Renewed house 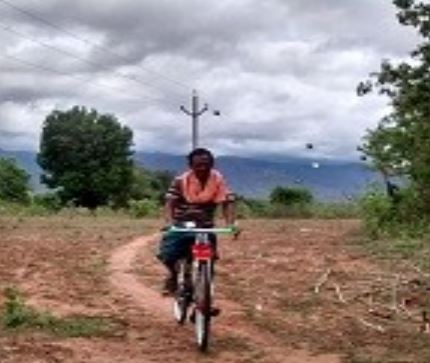 Lada on his new bicycle

Now, one can easily read confidence in the faces of Lada and Wendi Hikoka. Wendi proudly shares that now she need not go to other’s land for wage labour. She works in their own field and when they feel tired they enjoy a small nap under the tree shed of her own orchard plants.